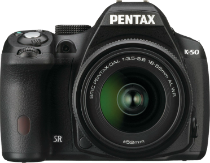 The Pentax K-50 without a doubt is a solid mid-range D-SLR camera, that is available in 120 different color combinations. Regardless that you can have it in a pink and lilac color scheme, it is a great photographic utility. Cosmetics aside, it has the exact same body design as the K-30, featuring a 16 mega-pixel APS-C image sensor, weather sealing, a pentaprism view-finder, as well as fast 5.9 fps burst shooting. It isn’t quite as well rounded a camera as our Editor’s Choice the Nikon D5200, that is really a better D-SLR for video recording due to a hinged LCD at the rear of the camera as well as having a superior auto-focus. However if video recording is not a issue, the K-50 would be a good option for those who like capturing photos in bad weather as well as for demanding shooters that are unimpressed by Nikon’s D5200 pentamirror view-finder.

The Pentax K-50 is rather compact measuring just 3.8 by 5.1 by 2.8 ins (HWD) and weighs in at 1.4 lbs. It is slightly smaller compared to the Canon Rebel T5i measurements (3.9 by 5.2 by 3.1 ins), however the T5i weighs less at only 1.1 lbs. Among the reasons the K-50 is heavier is that it’s view-finder is actually a pentaprism of solid glass. It covers 100 % of the frame, and it is slightly brighter and larger compared to the pentamirror finders present in the D5200, T5i, and many other sub $1,000 cameras. Another factor would be the weather sealing; where each dial and button is protected by way of a gasket, which helps you shoot in rough weather. The K-50 cannot be submerged in water, but feel free to venture out and shoot photos in a hurricane or blizzard if it is combined with a sealed lens.

Another feature that sets the K-50 apart from other cameras in it’s class is a dual dial system that is programmable. Advanced photographers will enjoy the opportunity to assign to a dial some common settings for shooting that might generally go unused while shooting in shutter or aperture priority modes, such as EV compensation, ISO control, along with others. If you are not as proficient in the intricacies of photography, it is possible to set the K-50 to function in program or auto mode as well as fire away while it takes control of settings. There are various Scene modes offered, which gives some explanation with regards to when they can be applied.

The camera also has a 3 inch rear LCD that contains a 921k-dot resolution. Unlike the tilting display located on the Sony a65, the K-50’s display is fixed, which makes it a little harder to use if you want to shoot from odd angles. The display is incredibly sharp, though, you also use focus peaking as an effective focusing aid, when you activate live view mode. This feature shows in-focus regions of your frame to boost accuracy while focusing manually. Focus peaking only works for stills as the camera’s processor is not quite up to the task of maintaining it active while video recording, but can be a boon to anyone who has a collection of older, as well as manual Pentax lenses. Just like the Pentax’s other D-SLR models, you may utilize any K-mount lens with no need for adapters-that’s near 40 years worth of glass available that you can use. Similar to other Pentax D-SLRs, the shake reduction is incorporated in the body, not in the lens. This approach allows any glass you attach to reap the benefits of stabilization.

The K-50 is not the fastest camera to start and shoot, nonetheless it makes up for this with a quick shutter lag and an outstanding continuous shooting rate. It needs about 1.4 seconds to power on and fire an image, but it’s shutter lag is only 0.1 second in good light. If the image is out of focus to begin with, that figure increases to an average of 0.4 second. In low light the auto-focus slows a little, needing about 1.9 seconds to bring the image into clear view while using the optical view-finder. Live view focus needs about 0.8 second in bright light, and slows to 2.3 seconds in dim light. if you’re attempting to utilize the K-50 to focus in live-view on a dark subject with little or no contrast the time can extend to 4 seconds, but that is the case with any camera that has a contrast detect live-view focus system.

Where the K-50 really shines is in it’s burst rate. It’s able to capture photos at an outstanding 5.9 fps, a lot better than the 4fps which both Canon EOS Rebel T5i and Nikon D5200 are able to achieve . It can maintain this pace for an excellent 48 shots while shooting in JPG, but can only manage 7 shots in Raw+JPG or Raw only format. Shooting decreases once the buffer fills, but does not stop. about 8 seconds are required to clear the buffer for a 95-MBps memory card fully. This is in-line with the T5i; which manages 39 JPG shots, and is limited by 7 Raw images at a clip also.

The K-50 runs on the 16 mega-pixel APS-C image sensor, and has the ability to do capture images in JPG or Raw format. The K-50 permits extensive customization of the degree of noise reduction that’s used on images with high ISO settings. It is in a position to maintain noise below 1.5 % through ISO 3200, and is slightly above that mark on ISO 6400. The detail in JPG format was impressive at ISO 3200 and 6400. But at higher ISO settings images begin to lose their detail from smudging. Other cameras in this class fall short a bit compared to the K-50 when it comes to noise control; the Sony Alpha 65 and T5i can only manage to keep noise under 1.5 % through ISO 1600. With the exception being the Nikon D5200, which keeps noise under control through ISO 3200 also. It’s always smart to shoot in Raw if you’re willing to take time to process your images, since it offers you full control over noise reduction utilizing advanced software such as Photoshop Lightroom.

When it comes to video capture, the K-50 records 720p60 or 1080p30 footage in QuickTime format, supporting 24fps as well as 25fps options at either resolution. The footage looks very good, particularly when one of Pentax’s better lenses is mounted, but auto-focus is really a disappointment. Auto-focus while recording video is slow, plus it must be manually initiated by pressing the AF button. You can observe what section of the frame is active during focus prior to start the recording, however that vanishes when video is actually rolling, so there is a little guesswork involved with knowing what the camera is trying to focus on. It is possible to record video in aperture priority, program, or manual mode, but remember settings are locked after the recording begins. There is no mic input, so you will be limited to utilizing the camera’s internal microphone for audio. If video performance is key, then you may want to consider the Sony Alpha 65, or if an optical view-finder is essential, then the Nikon D5200-both cameras provide continuous auto-focus while recording, as well as offer mic input ports.

The K-50 comes with a re-chargeable battery, however an adapter is also available which provides the possibility to power the camera using 4 AA batteries. It supports SDXC , SD, and SDHC memory cards. It’s only ports are a remote control port and proprietary USB port-there is no HDMI output.

The k-50 is basically the same as the k-30, albeit with a different look and a ridiculous number of build to order color options, at a cheaper price. It’s pentaprism view-finder is among the best you can find in a sub $1k D-SLR, it is able to take shots at under 6 fps, it provides an in-body image stabilizer, image quality is first class, and it is fully weather sealed. Video performance is unfortunately a disappointment, which keeps the K-50 from taking the crown from our Editor’s Choice the Nikon D5200. On The Other Hand if video is not a concern, and you are looking for compact D-SLR with superb image quality, then we strongly recommend the K-50.